Hotels in North Bergen, NJ With Shuttle Service to NYC

Of the four hotels in North Bergen, we recommend staying at the Super 8. The Super 8 is one of the cheapest hotels in the area ($92/night) and offers the best shuttle service to NYC. The Third-party shuttle service departs from Super 8 just outside the lobby every 15 minutes from 6 am – Midnight. It costs $3 one-way. It drops off at 40th Street and 8th Avenue, just two blocks from Times Square and picks up in the same spot every 10 – 15 minutes as well. All of the other hotels have shuttles that run less often and cost more money. For example, The Meadowlands View Hotel is very similar to Super 8 in terms of price and amenities, but the shuttle schedule varies and costs $7 one-way (it’s dropoff point in NYC is 41st Street and Seventh Avenue.

The Howard Johnson is another economy hotel to consider with rates averaging below $100 per night. The catch is that this Howard Johnson has the most expensive NYC shuttle; it costs $15 one-way and has only three departures from the hotel in the morning and two departures from 39th Street and 9th Avenue a few blocks from Times Square in the evening. You must reserve the shuttle in advance.

The Holiday Inn Express will be a bit pricier than any other hotel in the area at approximately $145/night. But, the Holiday Inn Express is the only one of these that offers non-smoking rooms, so if that is important to you, you’ll want to pay the extra price. Their shuttle to NYC runs eight times per day from the hotel and returns to the hotel only in the evening from 8 pm to 11 pm. The cost is $7 one way and $12 round trip. The dropoff and pickup point in NYC is 41st Street and Broadway, just one block from Times Square.

All of the hotels offer free in-room wifi and free parking. All five of the hotels in the area also have mixed reviews in terms of cleanliness and service, but there are no luxury hotels in this area so this is a risk you’ll have to take to stay in North Bergen. We recommend the Super 8 because it has the best shuttle service in terms of cost and frequency, plus it has a good nightly rate for the area.

Who is Best for this Location?

North Bergen offers up economy hotels that have various levels of shuttle service to Manhattan. Travelers uncomfortable taking public transit will appreciate these options. In some cases shuttle run from the hotel lobby in other cases they pickup and drop off at a nearby intersection.

Neighborhood Vibe: North Bergen is a hilly neighborhood with an extremely high population density. Wherever you go, there will be people there. There are a few parks in the area and decent restaurants. But it is mostly a bland mix of retail areas and housing developments.

Getting Around: Public transportation in this area is not readily available. Area hotels offer van service into New York City. Otherwise, driving is your best bet.

What to Eat: Cuban and Italian eateries abound in North Bergen. Pan Con Todo Express is a fabulous place to get a Cuban sandwich and a coffee. For delicious Italian food in a welcoming atmosphere try Aumm Aumm Pizzeria or Trattoria La Sorrentina.

Things to Do: The New Jersey Beer Company is a popular craft brewery that offers tours and tastings. If you prefer to get outside, North Hudson County Park has a large waterfront area, bike trails, and numerous sports facilities including volleyball, bocce, and tennis courts. 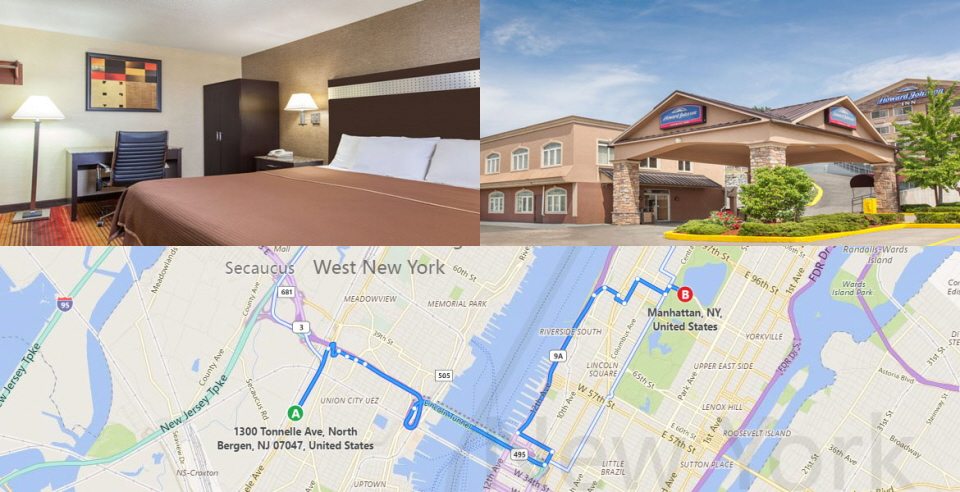